Our official Excellence in Sustainability Award!

Here is our official award. Congratulations to us! May our little garden and growing community continue to share love and home grown food with others! 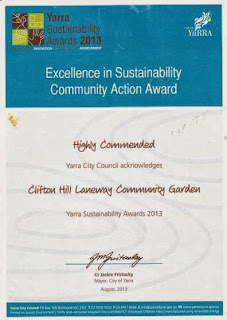 Posted by Clifton Hill Community Garden at 19:22 No comments:

You have been 'Highly Commended' for your digging, growing, composting, weeding, innovative piping methods, and friendly community spirit....Keep it up and thanks to everyone for creating such a lovely garden!

Here are some unofficial photos from Fitzroy Town Hall on the night of the awards ceremony on 22nd August, 2013. 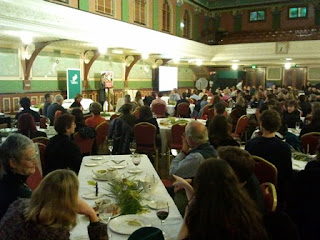 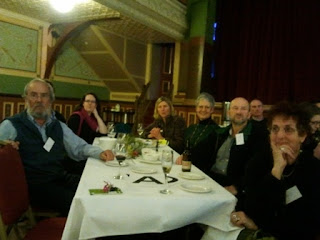 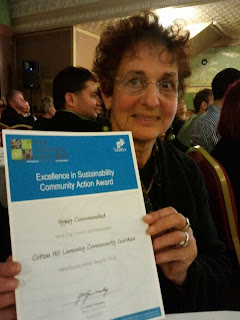 Had a successful working bee, lunch and compost workshop on February 16th. Did a general clean up of the garden - weeding, clearing out rubbish, resetting steps and bricks - followed by a delicious lunch. Glenda Lindsay, the "Compost Queen" (plus 2012 City of Yarra Citizen of the Year no less), led a compost workshop telling us what should and shouldn't go in, how often to turn the compost (weekly), and how to know when it is ready (should look like soil - not smelly or too lumpy). Enquiries about joining the garden most welcome. There is still gardening space left!
Posted by Clifton Hill Community Garden at 12:39 No comments:

Garden Working Bee - Back in October 2012 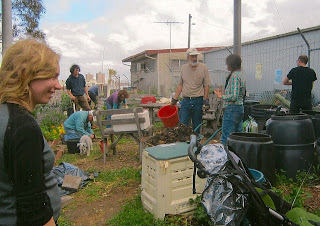 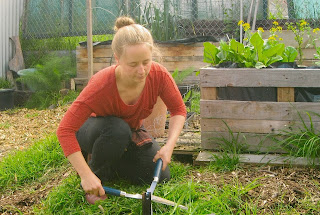 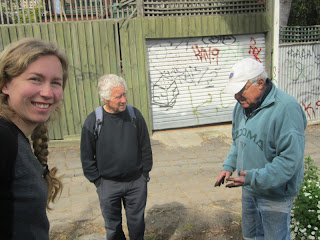 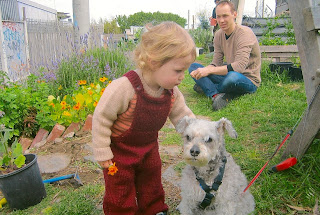 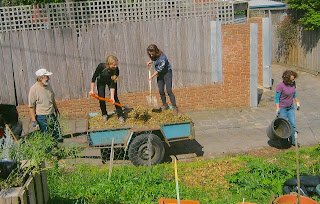 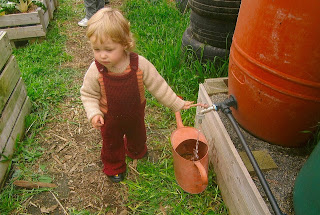 Posted by Clifton Hill Community Garden at 17:07 No comments:

In the art garden... 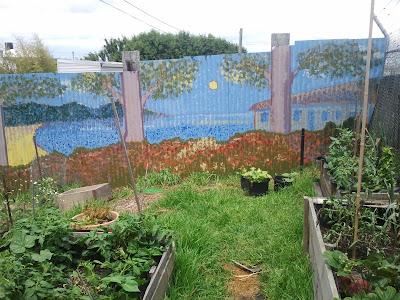 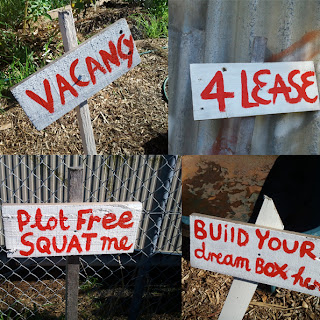 Its. Almost. Spring!!! And to celebrate, the weather is going to be 19 degrees on Saturday, which means its get down to the garden time!! From about 1.30pmish there will be some casual gardening/renovation works going on and everyone is welcome. And being spring-time, maybe its time for you to dust off your tools and build your very own box?
Posted by Clifton Hill Community Garden at 17:48 No comments:

The garden just isn't allowing itself to be limited by the boundaries of the laneway: it's leaking out into the community.  The first box to break away was reported here, and made plenty of waves.  Now a second box is up, tucked away in Rutland street.

It's a wicking bed, planted with low maintenance herbs, such as dwarf rosemary, Spanish tarragon, creeping thyme, German camomile, perenial basil and oregano.  An ornamental kale centre piece will provide a bit of variation, along with an Hakawase strawberry; lettuce was planted in between the herbs, to take fill up the space while the perennials are still small.  Mint Corsican was planted in clumps in between, in the hope it will form a living mulch, and we also spread some alfalfa seeds to do the same job whilst everything else gets established.

It's not just a planter box for the community, but came from the community.  It was all made possible with the encouragement of locals, and the help from Dale, Neil, Maude, Crina, Barry, Sue and Norm, sponsorship from the Clifton Hill/ Fitroy North Community Bank, and compost made from food scraps from the Quince and Squirrel Cafés.


Posted by Clifton Hill Community Garden at 02:50 No comments:

Clifton Hill Community Garden
Victoria, Australia
We're a group of enthusiastic food gardeners based on the laneway between 21 and 23 Gordon Street, Clifton Hill, Melbourne. We're constantly looking for new ways to grow food in our suburb, and thought it would be nice to share some of our urban agriculture adventures here. We're looking for new members, so get in contact if you'd like to joint us.